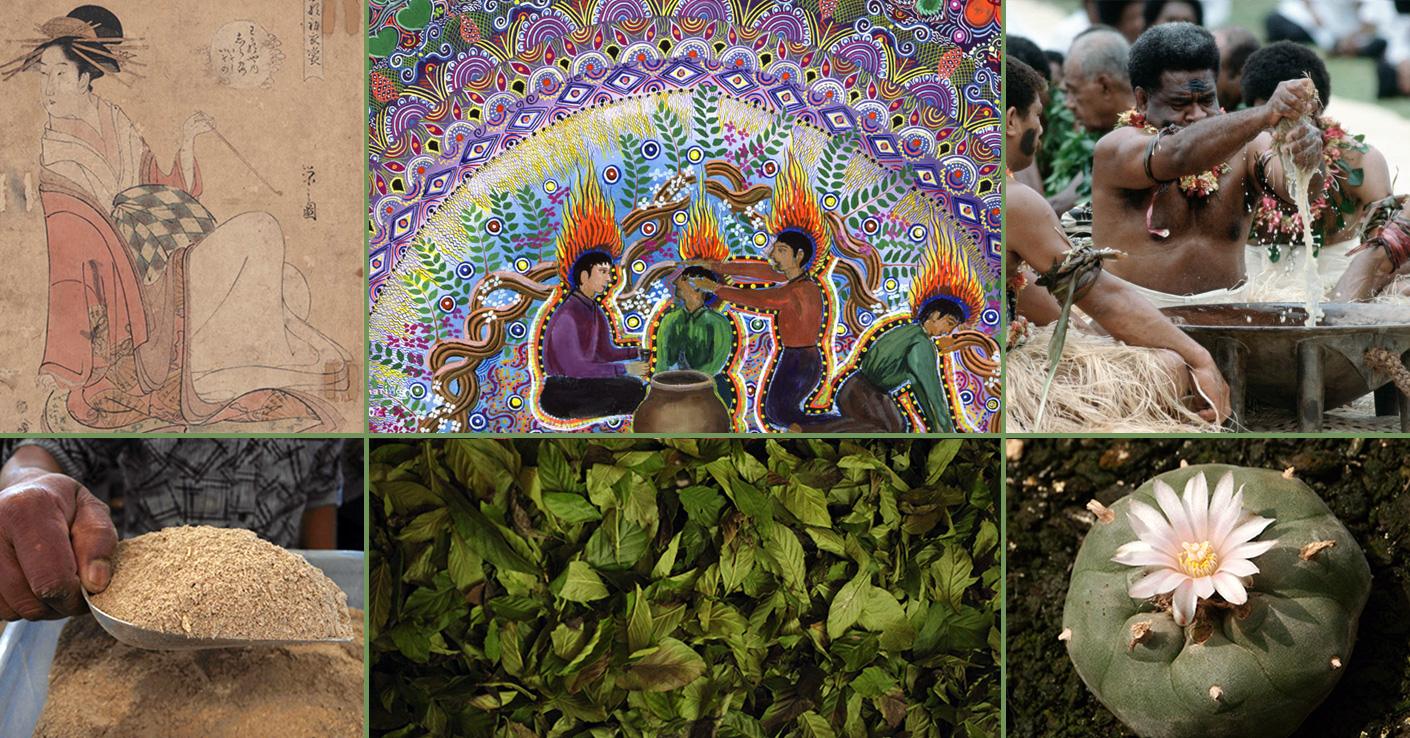 Human societies have been getting high since ancient times. Why do we all yearn for altered states of consciousness?

Every society on earth is a high society. As the sun rises in the east, caffeine is infused and sipped across China in countless forms of dried, smoked and fermented tea. From the archipelagos of Indonesia and New Guinea through Thailand, Burma and India, a hundred million chewers of betel prepare their quids of areca nut, pepper leaf and caustic lime ash, press it between their teeth and expectorate the day’s first mouthful of crimson saliva. Across the cities of Thailand, Korea and China, potent and illicit preparations such as ya’aba, home-cooked amphetamine pills swallowed or smoked, propel a young generation through the double working shifts of economic boomtime, or burn up the empty hours of unemployment, before igniting the clubs and bars of the urban nightscape.

As the sun tracks across towards the afternoon, the rooftop terraces of Yemen’s medieval mud-brick cities fill with men gathering to converse and chew khat through the scorching heat of the day. Across the concrete jungles of the Middle East, millions without the means for a midday meal make do with a heap of sugar stirred into a small cup of strong black tea. As the working day in Europe draws to a close, the traffic through the bars of the city squares begins to pick up, and high-denomination euro notes are surreptitiously exchanged for wraps of cocaine and ecstasy. In the cities of West Africa, the highlife clubs are thick with cannabis smoke, while in the forests initiates of the Bwiti religion sweat their way through their three-day intoxication by the hallucinogenic root iboga, during which they see the visions that will guide them through the passage to adulthood.

When daylight reaches the western hemisphere, it illuminates the broadest spectrum of drug cultures on the planet. Across North America’s cities, the sidewalks throng with office workers clutching lattes and espressos, while giant trucks thunder down interstate highways delivering tobacco and alcohol on a scale now rivalled by the industrial marijuana plantations concealed in giant polytunnels and warehouses among the forest tracts of California and Canada. Further south, the Huichol people of Mexico, despite the mesh fences and enclosures spreading across their ancient hunting grounds, still make their desert pilgrimage to harvest peyote cactus for their rituals, while street children in the barrios of Colombia and Brazil stupefy themselves with petrol-soaked cocaine residue and aerosol sprays. And in the Amazon, dozens of tribes, as they have since time immemorial, squat around fires powdering, toasting and brewing the seeds, roots and leaves of the world’s most diverse mind-altering flora.

Finally the sun sets across the islands of the south Pacific, the most remote outposts of humanity. Here, almost all the drugs consumed by the rest of the world remain unknown: even alcohol and tobacco are costly imports, rare outside the urban centres. But from the middle of the afternoon, the men have been drifting in from their gardens and plantations to grate, chew and soak kava root for their evening brew. As the sun sets, they congregate in huts to drink it from coconut shells and share some whispered conversation, or squat alone on the beach to listen to its voice in the surf, as the sunset fades to darkness.

Perhaps the earliest drug artefacts in the archaeological record are two chillum-style pipes fashioned from hollowed-out puma bones, excavated in 1973 from a cave high in the Andes of north-west Argentina and radiocarbon-dated to before 2000 BC. The pipes were found to contain the burnt residue of the seeds of the mountain shrub Anadenanthera, a rich source of dimethyltryptamine. DMT, as it is known, is among the most powerful naturally occurring hallucinogens. When smoked or snuffed in sufficient quantities, it produces a rapid reaction of extreme nausea and often convulsive vomiting, accompanied by a few minutes of exquisitely strange, beautiful or terrifying visions.

With the appearance of monumental architecture in South America, the use of such drugs is attested in more detail. The ceremonial centre of Chavín, constructed in the Peruvian Andes in the centuries around 1000 BC, is surrounded by towering stone walls studded with a series of grotesque stone heads frozen in various stages of transformation from human to jaguar. As the heads grin and grimace, eyes bulging and fangs sprouting, streams of mucus pour from their noses: a telltale sign of the snuffing of powdered Anadenanthera seeds, which is further attested by the distinctive snuff trays excavated from similar sites across Peru, Bolivia and Chile. The drug’s effects were, it seems, understood as a process of shapeshifting between human and monstrous feline forms.

The notion that DMT-containing powders and potions transform their human subjects into animals – particularly predators, such as big cats or snakes – remains widespread throughout the many shamanic cultures of the Amazon region today. Animal transformation is not regarded as pleasurable: indeed, in both ancient and modern traditions it is represented as physically unpleasant and emotionally traumatic. Just as the stone heads on Chavín’s walls appear in a transport of agony rather than ecstasy, the Amazon cultures who still use DMT-containing snuffs, or infusions such as ayahuasca, typically describe the ordeal as terrifying. The drug is taken not for sensory gratification, but for immersion in a collective mental and spiritual world in which the participants become something more than human.

Between 1966 and 1969, the Austrian-born anthropologist Gerardo Reichel-Dolmatoff made a series of field trips to study the use of hallucinogenic snuffs among the Tukano Indian groups in the Vaupés area of the Colombian Amazon. These groups have little in the way of social hierarchies, chiefs or councils of elders; conflicts are largely mediated by shamans, a category of adult males with specialist knowledge of plants, hunting or healing. The shamans’ activities are almost always conducted under the influence of a snuff prepared from the DMT-rich sap sweated out of the bark of various trees of the Virola genus. Powdered and propelled into the sinuses through a hollow stone or bone tube, the sap produces a state of heightened awareness in which diseases are treated and weather and game patterns predicted. But when large doses of snuff are taken, it is universally recognized among the Tukano that the shamans will turn into jaguars.

When Reichel-Dolmatoff attempted to establish precisely what this transformation entailed, he received a bewildering variety of explanations. The ‘jaguar complex’, as he termed it, operated across many levels of meaning. On one level, it described the physical sensations produced by the drug: snuffing produces a painful burning sensation followed by convulsive nausea, and shamans in the grip of these symptoms are said to be jaguars writhing and ‘turning their bellies up’. They were also consciously imitating jaguars: many shamans had personal collections of jaguar skin, claws and teeth. But they were also genuinely believed to be shifting form, taking on powers that make them capable of bloody acts of predation and revenge. It follows from this that a jaguar encountered in the wild may not truly be a jaguar, but rather a shaman in feline ‘dress’. Shamans acting in this way are able to enter the dreams of others in jaguar form. As they wander in the forest, their jaguar ‘dress’ can also guide them to the trails of ‘real’ jaguars, which they might witness, as some zoologists have, chewing on hallucinogenic vines and ‘turning their bellies up’ as the effects take hold.

On the surface, the transformation of shaman into jaguar seemed to be accepted as real by all Reichel-Dolmatoff’s subjects. Young men regaled him with bloodthirsty tales of rapes and murders that they had undertaken in feline form, often of friends or close kin; claw-marks and bloodstained whiskers were offered up as physical proof. But these terrifying tales tended to evaporate under scrutiny. The alleged victims were still alive and unharmed: the acts of violence seemed to have taken place in a parallel world. Indeed, Reichel-Dolmatoff’s informants acknowledged that ‘real’ jaguars are not particularly ferocious or dangerous, and are far more likely to flee from humans than to attack them. The shaman’s transformation into a jaguar was a symbolic theatre in which impulses of aggression and revenge could be acted out physically and tangibly, but without real-life consequences.

Yet the jaguar transformation was more than charade or a drug-induced fantasy. Under the influence of the snuff, shamans found themselves awakening into a state of hyper-consciousness in which they could see, hear, smell and understand aspects of reality normally hidden from view. The idea that they had transformed into jaguars made sense of these sensations: they were in possession of the uncanny night vision of the predator, its speed and agility, its preternaturally acute hearing. They were able to observe the world through new eyes, to receive unfamiliar impressions, and to expand the store of natural knowledge demanded by their role: the positions of the stars, the habits of other animals, the patterns of plant growth, the fluctuations of weather and climate, the hidden weave of nature itself. Used in this way, drugs can operate as a kind of sensory prosthetic: just as a diving suit allows humans temporary access to a normally hostile and alien world, Virola snuff allows the shaman to encompass a world populated by many different forms of consciousness and to glimpse a perspective beyond the limits of the human. 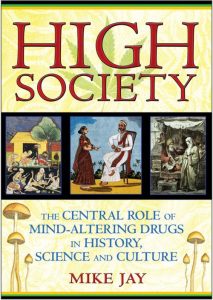 This article on the universal yearning for altered states of consciousness is an excerpt from High Society: The Central Role of Mind-Altering Drugs in History, Science, and Culture by Mike Jay

Mike Jay
Mike Jay has written widely on the cultural history of science and medicine, and is a leading specialist in the study of drugs across history and cultures. He is the editor of Artificial Paradises, an anthology of drug literature, and author of the widely acclaimed Emperors of Dreams, a narrative history of drugs in the nineteenth century, and The Atmosphere of Heaven, on the discovery of nitrous oxide. His website is Mikejay.net

Mike Jay has written widely on the cultural history of science and medicine, and is a leading specialist in the study of drugs across history and cultures. He is the editor of Artificial Paradises, an anthology of drug literature, and author of the widely acclaimed Emperors...