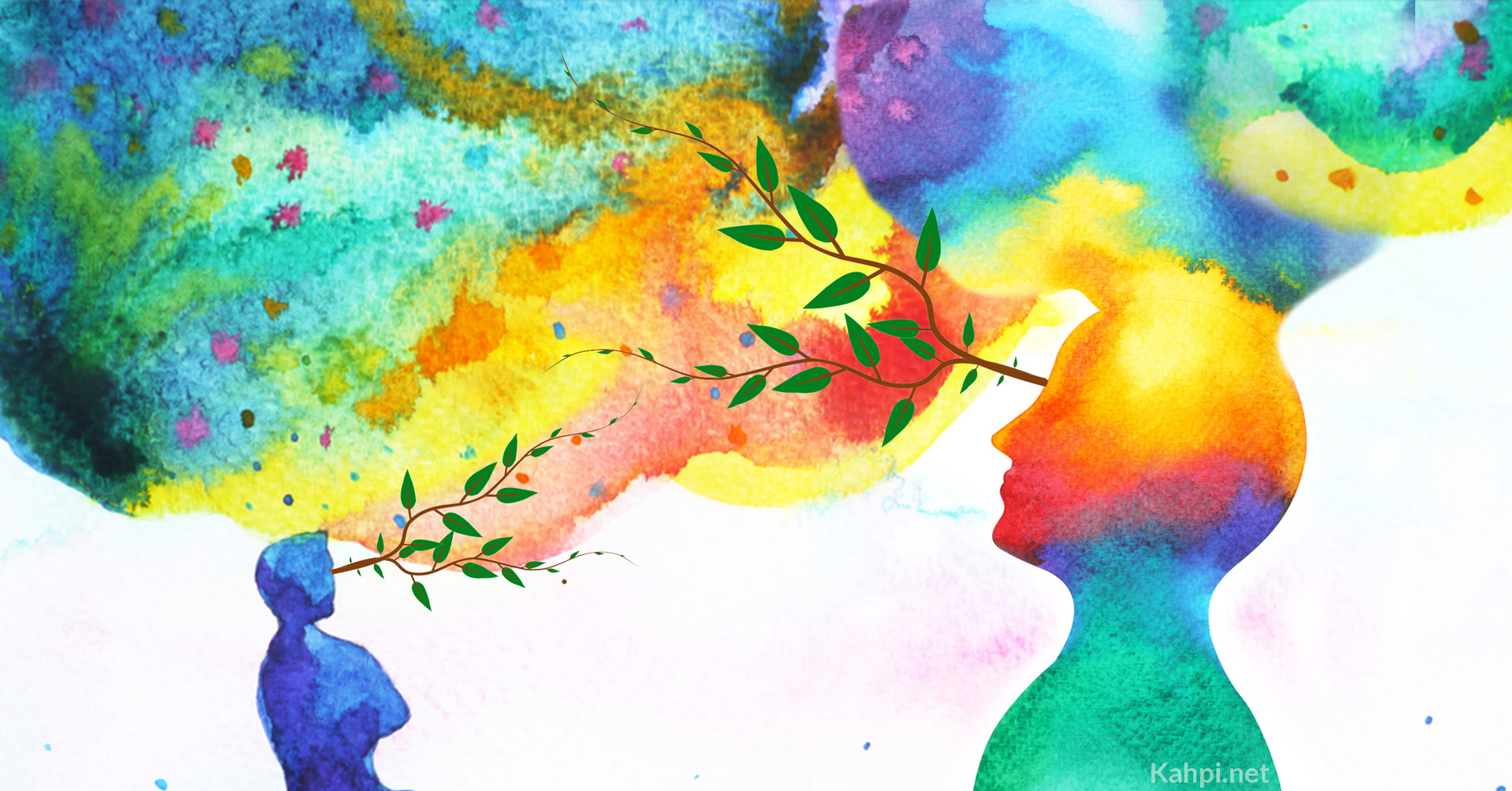 Ayahuasca drinkers sometimes refer to themselves as "vision seekers". The spectacular imagery of the ayahuasca experience has allured talented painters, animators, and other creatives. But do the visions reveal something beyond the mind?

Aside from its healing properties, the sacred Amazonian brew ayahuasca is well known for inspiring deep psychonautic journeys and spectacular visions. These mind adventures or flights of the soul take place in strange, hyperspatial environments. Ayahuasca visions are adorned with intricate designs that pulsate with light and color. Most surprisingly, people usually report interacting with intelligent entities or “teachers” in the visionary environment. People describe encountering everything from animals, plants, and humans to gods, aliens, hybrids, and indescribable beings.

These phantasmagoric sights can have a profound influence on anyone who witnesses them. They can appear incredibly vivid and detailed and well beyond anything you thought you could have dreamt up. Neuroimaging research indicates that the area of the brain responsible for vision lights up intensely during the ayahuasca experience, “comparable in magnitude to the activation levels of natural image with the eyes open”. The brain activation during mind wanderings or day dreaming looks similar to that of real dreaming during REM sleep, but ayahuasca visions feel very different from dreams. After the effects of ayahuasca have worn off, some partakers can be quite convinced that they indeed visited another plane of existence.

Contents hide
1 The Default Reality
2 Experiencing Ayahuasca Visions
3 A Totally Different Experience
4 Do They Come to Us, or We to Them?
5 The Universal Archetypes
6 Stay Updated on All things Ayahuasca with our Monthly Newsletter!

After a profound ayahuasca experience, our ordinary world is often perceived with the understanding that it is not the be-all and end-all, but rather just one of the existences, and quite a limited one at that. There is no denying we live in a physical realm where things decay and dissolve, where laws of physics govern, and where stuff appears dense and stable. Having said that, we also know from physics that what constitutes matter is mostly empty space, and that matter is in constant motion.

In this ordinary reality that you engage to do things such as read this article, not only is your perception limited, but your capacity to experience emotion is patterned with limitations, too. The intensity of awe, bliss, and love that can be felt during an ayahuasca journey can feel like a world of difference from ordinary feelings. Meaningful realizations can flow out of the experience: we may feel more grateful or free, with the underlying awareness that the beyond is truly out there, and that it’s spectacular. Everything that happens in the default life, then, is, somehow, more okay.

But what are these peculiar and spectacular visions? It’s arguably not so important to ask whether they are real or not—because this can never be proven. I prefer to aim at their source: are they products of our mind, the result of our thoughts running through neural circuits altered by an ingested substance, or are they actually something separate, some universal information that we receive?

As with most deep questions that concern the mind and soul, the answer is inevitably that it’s complicated. The bottom line is that we don’t know, and we probably can’t ever really know for sure. However, we can untangle parts of the great mystery and discuss the emerging possibilities.

In mild states of altered consciousness, like those we are put into by ingesting alcohol or marijuana, we can notice some perceptual changes. Proprioception and the relationship between physical dimensions are slightly off, and our way of thinking and interacting changes. At times, we can even see something resembling visions, fuzzy patterns of color and light behind closed eyelids. Are they visions? Maybe, but they are quite unstable and easily influenced by outside factors. More likely they are just responses of our mental system to any stimuli it’s receiving.

With higher-intensity substances such as LSD, the visual experience can take on a much more stable, vivid, and crisp quality. Seeing sounds as patterns, smelling visions, or other effects of synesthesia can be extremely beautiful and entertaining. Yet during bad trips, these sensory tricks can be strikingly harrowing. The array of things to be seen is astounding: from fractal shapes made of color and light to highly detailed animations and dream-like scenarios with developed worlds and well-crafted characters.

Some people argue that the source of these visions is simply our own imagination being layered over reality. This is because as vivid and elaborate as they may be, such visions dramatically respond to ordinary perception or changes coming from the outside. The ability of ordinary objects of perception to influence the visions may be indicative of them not being separate from our own realm of experience.

And then there is ayahuasca.

If taken in sufficient quantity, and with the right mindset and setting, ayahuasca can induce an experience that resembles no other psychonautical voyage. The worlds to be lived by consuming this brew have a different quality to them. Somehow, even though they are so wildly different from anything imaginable, they can feel strangely welcoming—almost, even, as if it were more a “welcome back” than a regular “welcome”. But more than that, they can give us an unmistakable feeling that we are entering something that has existed there since long before we drank the tea, since long before anything, actually.

The realms ayahuasca unveils to us can feel more real than reality itself. This is understandable. When we get down to it, we inhabit a world where everything is transient and conforms to rules we can mostly describe with a few mathematical symbols. It’s easy to get enchanted by one in which everything seems eternal and infinite, exists in many more dimensions, and apparently conforms to nothing, an existence where energy is not compressed into matter but floats freely in all its infinity. Painters and video animators have had a field day trying to portray the heights of the ayahuasca experiences.

Do They Come to Us, or We to Them?

After taking ayahuasca, visions commonly come in waves of increasing stability and intensity. At first, they can resemble ones we are familiar with from other psychedelic experiences; undulating fractals and patterns, lights, and colors. They are strongly influenced by sounds from the outside and morph or transition into one another fluidly. At some point, though, the vision space fills out and seems to stabilize into what it has become. The elements inside still perform their mind-bending transformations, but the setting remains, and the changes in it appear to come from the soul of the visitor traveling away to different dwellings or landscapes. This is one of the most fascinating aspects of the ayahuasca experience and a reason to consider the existence of these realities as “others” from this one.

Of course, the manifested worlds can, with an appropriate mindset and knowledge, be moderated by oneself, or, better, the shaman or ceremony guide. As anthropologist Luis Eduardo Luna explained, by singing icaros, sacred songs that the spirits of the Amazon jungle teach the curanderos (healers), they can open up portals into worlds they choose to bring their patients into. These sacred songs are said to summon spirits of various plants and animals to attend the session. The passageway between the worlds stays open and protected by the shaman and can be returned to by focusing on the icaros. If you stray away into dark thoughts during the ceremony, you can use them like you would a safety rope. Feeling the enduring nature of these worlds is quite an awe-inducing experience.

Another argument would take into account the entities themselves that many claim to have met under the effects of the brew. While a myriad of interesting apparitions have been associated with LSD trips, the beings and spirits coming forth in ayahuasca journeys or DMT experiences are often characterized as intelligent. It’s impossible to pin it down, but those who report interacting with entities during ayahuasca journeys often include descriptions of telepathic communication or speaking languages they don’t know, learning things about life and the universe, resolving personal inhibitions, releasing attachment, and making peace with suffering, all with the help of these teachers.

If all of this were random and idiosyncratic, it would make sense to attribute it to individual differences and label it as manifestations of (sub)consciousness. However, and as an outline of the strongest argument in this discussion, there exist extremely salient archetypal similarities in visions of ayahuasca drinkers of vastly different backgrounds and experience with the brew.

Visions are a most remarkable gift of the psychedelic experience. There is nothing quite so humbling and blissful as witnessing completely different universes and interacting with intelligent entities that carry messages of overwhelming tranquility or profound insight. However, no words suffice to describe how majestic and real all of this can feel. So, whether this text leaves you dazzled and intrigued or still solidly skeptical, always remember that words fail to do justice to experience. This basic truth takes on a whole new meaning when encountering the wondrous ayahuasca visions.