Kahpi
Home Shamanism & Spirituality What the Psychedelic Experience Really Is 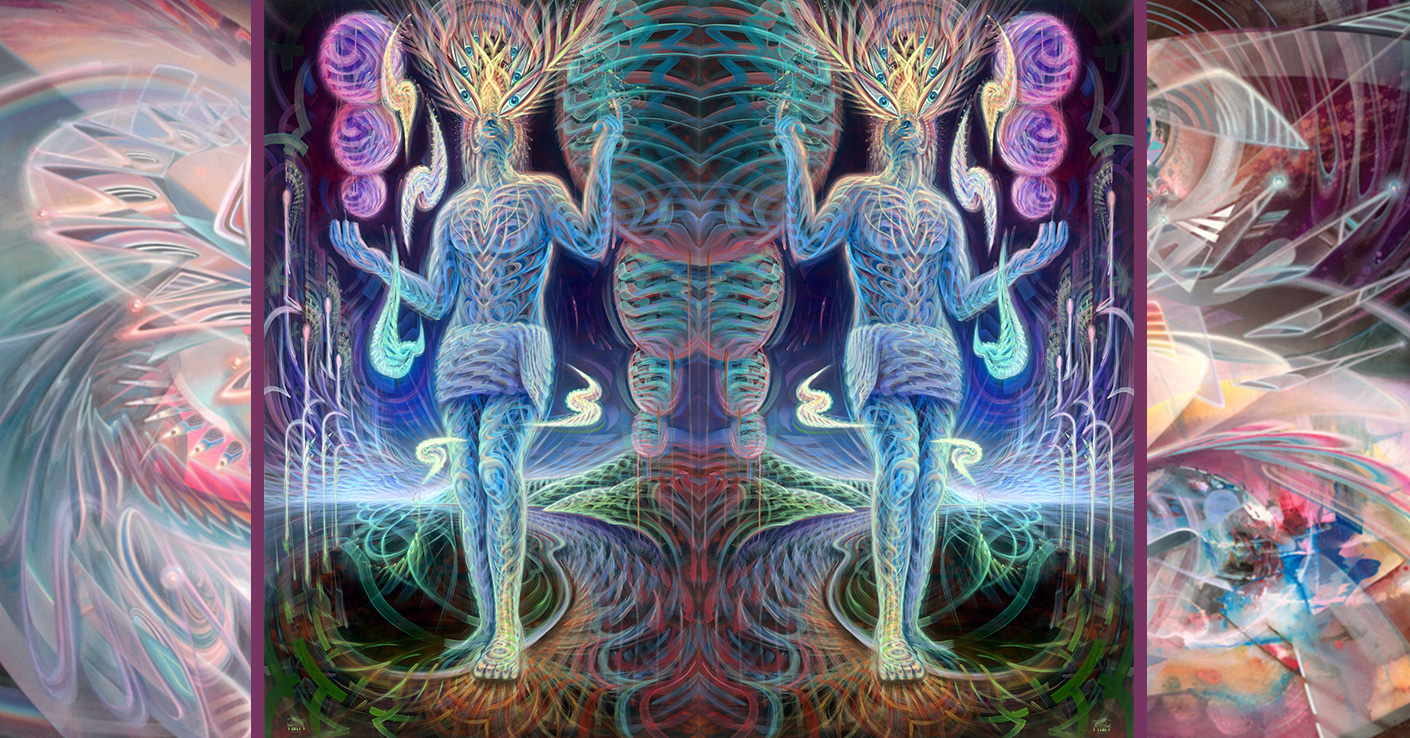 Delve into the depths of the phenomenology of the psychedelic experience to see what lies behind the veil of ordinary consciousness.

There are many psychedelic experience accounts online and in books, written by people who’ve dabbled or dived into substances from LSD to psilocybin, from peyote to (increasingly these days) ayahuasca. I enjoy reading these reports, which are often very moving in terms of their life-changing power, or impressive in terms of the depth of people’s visions and lessons received.

However, I find many accounts fall short in terms of the subject’s understanding of what’s actually happening during a psychedelic experience. They often focus on their personal emotional and psychological experience — the “Dr. Phil” aspect. Some writers provide scientific research into how these psychotropic plants and drugs affect the brain and metabolism. Some speculate about the spiritual or philosophic aspects of psychedelic experiences. This occurs less often.

The late Terence McKenna was arguably the best at putting it all together; McKenna left a treasure trove of insights on the philosophy of science, history, anthropology, shamanism and other disciplines woven together with psychedelic experience.

My own experiences have shed light on “what is really happening” during psychedelic experience, which I think isn’t adequately captured by terms like hallucination or even lucid dreaming. There’s actually a large lexicon of terms that people bandy about to describe psychedelic experiences. Examples include: journeying, tripping, hallucinating, traveling to the spirit world, visiting another dimension, and so on. These terms certainly hint at what’s going on, but I feel they fall short of the mark.

“What’s happening isn’t that the psychedelic is stimulating the imagination; instead, the hallucination we normally call reality is interrupted, and a deeper reality of universal consciousness leaks in.”

So, I offer my own explanation, with the caveat that different psychedelics have slightly different impacts, and even the same psychedelic can affect a person differently on different occasions. (Ayahuasca, for example, can impact a person as a mostly physical purging during one ceremony, then offer visionary experience the next time.) Still, the experiences have enough elements in common that we can generalize, at least a bit.

I don’t wish to bog down in the latest science, but it’s worth noting that some of the research into psychedelic experiences is consistent with my own sense of what’s happening. Contrary to many people’s assumption that these substances stimulate the frontal cortex of the brain, experiments show that they instead restrict blood flow to this area, which hosts what writer Graham Hancock calls the “alert, problem-solving” mind.

It appears that in addition to being home of the rational thought processes, the frontal cortex has a role restricting and filtering the vast amounts of information the rest of the brain receives all the time (presumably so we can cope with ordinary reality in our problem-solving lives).

The psychedelics, in other words, interfere with the frontal cortex’s usual filtering function and let in other information — sometimes vast amounts of it — that’s normally hidden from consciousness.

So the question arises, What is this information? Where does it come from? And is it “real” (whatever that means)?

I have some complicated answers to these questions but the most straightforward I can muster goes along the lines of what I said to a friend recently when she asked the same things: Psychedelics offer an experience of ultimate reality.

A psychedelic experience is not mere hallucination — I feel strongly enough about this that I never refer to the plants or medicines as “hallucinogens,” just as I avoid that loaded term “drug.”

The hallucination we normally call reality is interrupted, and a deeper reality of universal consciousness leaks in.

Instead, my working hypothesis is that when psychedelics are consumed the constrained view of reality a human brain synthesizes all the time, which is very selective, dissolves; then a view of the more complete reality of things — normally hidden — emerges into the realm of consciousness. In this interpretation, what’s happening isn’t that the psychedelic is stimulating the imagination; instead, the hallucination we normally call reality is interrupted, and a deeper reality of universal consciousness leaks in.

This view is consistent with the Buddhist/Hindu idea of each of us (and every living creature) as Shiva playing a game of cosmic hide-and-seek, so forgetting himself that it no longer appears as a game or dream. The Buddhists routinely say we’re all manifestations of the universe via which it experiences itself (as you, as me, as a butterfly, as a fish, and so on). The twist is that the universe is made up of consciousness — non-local consciousness: a vast rolling sea of ceaseless creativity and invention.

“This is the hermetic realm of the psychopomp, the trickster, the inhabiter of twilight and shadow realms, standing half-way between the lands of the living and dead.”

Consumption of psychedelics interrupts ordinary consciousness and its reality-manufacturing assembly line. For a brief time we glimpse (and/or hear or experience) fundamental reality. More correctly, we return to becoming that which we truly are (the universal consciousness) without the illusion of the particular, the local, the separate.

This is why consumers of psychedelic medicines routinely describe feeling “at one with everything” and also state that what they see is somehow more real than the so-called real world. This is one of the great surprises from the active ingredients in mushrooms and ayahuasca: where one might expect a nonsensical dreamscape, psilocybin and dimethyltryptamine often present the mind with powerfully organized realms of information.

It’s tempting to say that, after an ayahuasca experience (for instance), one has accessed another dimension. I think this is fair, but I resist the idea that this dimension is part of another world. Instead, I feel it’s another dimension of this world. In fact, I venture it’s a dimension of this world that creates this dimension: the two (or three, or ten) dimensions are inextricably linked. Whenever I journey (with or without medicine) I often have the sensation I’m witnessing this world brought into being. Sometimes it’s like a backstage tour, learning the magician’s secrets.

Of course it’s difficult to prove any of this. One can’t exactly return from that other dimension with a phlegm-covered antler or silver coin, though such events are rumored in shamanic ceremonies. Instead, one’s left arguing that it seemed real to the extent that one believes it is real, which will never be convincing to a skeptic (at least until they try the medicine themselves).

This is the hermetic realm of the psychopomp, the trickster, the inhabiter of twilight and shadow realms, standing half-way between the lands of the living and dead. It’s a house of mirrors that betrays one’s first impressions over and over, deepening the sense of reality even as it overturns the revelations of the previous level.

A great example was one of my first ayahuasca ceremonies, at a spiritual centre in Peru, where I wandered outside to use the bathroom, which was in one of several stalls in a concrete building. The stall had a concrete floor and concrete walls, and was lit only by a single candle. A more utilitarian space there never was.

“If I can make a concrete floor appear as ice to you, with a river flowing under it, I can convince your mind of anything, can’t I?”

As I sat on the toilet the stained floor — which logic told me was made of concrete — turned into ice, semi-transparent, with creatures and vegetative forms moving underneath as though the ice had formed over a flowing river. I could see the water moving under the ice, and I could see thick cracks in the ice that shifted in perfect three-dimensional perspective as I tilted my head this way and that.

After a while I realized I’d better finish up quickly and get out of there, in case the ice cracked and something jumped up, or in case I fell in trying to get from the toilet to the door. (The illusion was so convincing that I really had these thoughts!)

Then I remembered the instruction from the shaman: Don’t just succumb to the vision — always ask yourself, “What is the lesson?”

I thought for a moment and then it hit me, and what occurred became one of Mother Ayahuasca’s greatest teachings on that trip: “If I can make a concrete floor appear as ice to you, with a river flowing under it, I can convince your mind of anything, can’t I?” the medicine seemed to say (non-verbally of course). I realized at that moment everything is a hallucination synthesized by my own mind — a concept that’s consistent with modern quantum physics and many replicable experiments such as the delayed choice quantum erasure.

Had this been a story (like the one you’re reading now) I would never have been fully convinced. It would have just been a cool sci-fi concept, like in The Matrix film trilogy.

But because I experienced it directly, when I otherwise felt quite sober, I learned how my mind works and how reality is created (or what we call reality). So there you have it: my explanation of a psychedelic experience is that it’s nothing less than an encounter with reality, the very opposite of what the non-initiated assume. Ironically, descriptions of experiences of that reality are perceived by the non-initiated as dreams, hallucinations. Yet it’s they who remain trapped in the prison of a holographic world, unaware because they’ve never stepped out of it, or glimpsed above the prison walls.

Strangest of all, over time I realized that psychedelic experiences were not causing me, Guy Crittenden, to awaken. Instead, they caused the universe to awaken from the dream of being me.

Fresh off the print, the book The Year of Drinking Magic: Twelve Ceremonies with the Vine of Souls recounts in detail journalist Guy Crittenden’s experiences working with the visionary shamanic plant ayahuasca over the course of an extraordinary year of personal growth and transformation.

Header artwork is a collage of paintings by Dennis Konstantin.

Guy Crittenden
Guy Crittenden is a veteran journalist and magazine editor. He now writes mostly on environmental issues and spiritual themes such as Amazonian plant shamanism. His new book The Year of Drinking Magic: Twelve Ceremonies with the Vine of Souls (Apocryphile Press) is available on Amazon.

When the Ayahuasca Ceremony Goes Wrong

The Shaman’s Treasure: The Many Plants Added to the Ayahuasca Brew

Guy Crittenden is a veteran journalist and magazine editor. He now writes mostly on environmental issues and spiritual themes such as Amazonian plant shamanism. His new book The Year of Drinking Magic: Twelve Ceremonies with the Vine of Souls (Apocryphile Press) is...