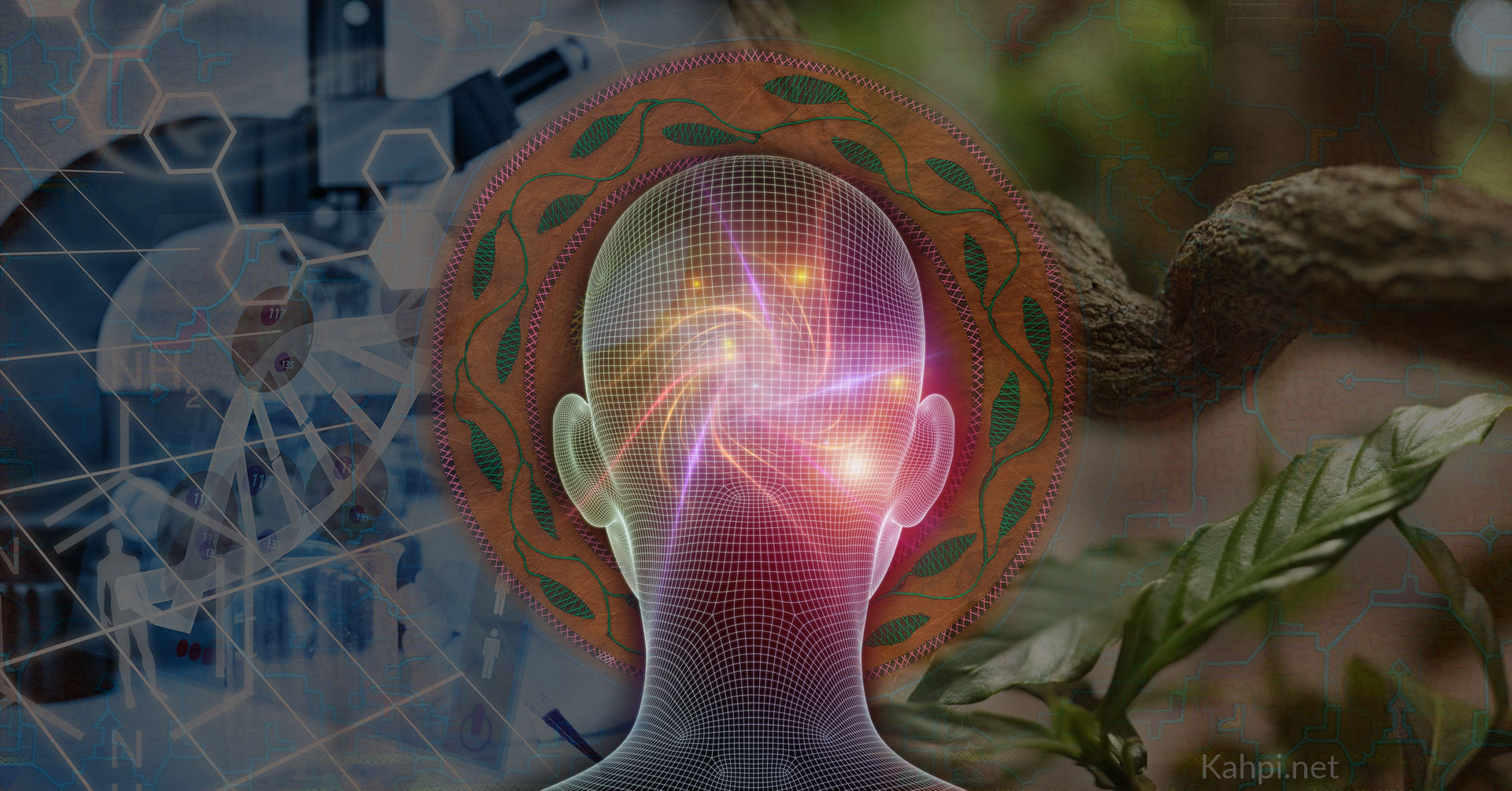 As part of an international network of leading researchers, Rafael Guimarães dos Santos reflects on what science currently knows about the mysterious Amazonian brew ayahuasca.

I was first attracted to study the Amazonian brew ayahuasca in the early 2000s, when I was a graduate student in biology in Brazil. I was practicing the Brazilian martial art capoeira, and the teacher was also the leader (padrinho) of a local Santo Daime church, which served ayahuasca. I remember my first experience very clearly. It included vivid visions of Amazonian indigenous art work. The visual aspect of the experience impressed me so much that I still wonder how some plants can deeply alter my brain in this way.

Ayahuasca, from the Quechua for “vine of the souls”, is a botanical psychedelic preparation made usually with two Amazonian plants: Banisteriopsis caapi and Psychotria viridis. Scientific studies on how it affects the body and mind began in the early 1990s but had a significant increase from the year 2000 onwards. Our group at the Ribeirão Preto Medical School is one of the leading ayahuasca research groups. We conduct experimental and clinical research. By summarizing key scientific investigations done on ayahuasca and focusing on the studies undertaken by our group and collaborators, I hope to share in this article why now is an important and fascinating time to be an ayahuasca researcher.

Ayahuasca has fascinated scientists and others since the 19th century, with the early reports by Richard Spruce on its indigenous uses and botany. Then, in the 1930-1940s, harmine, the main beta-carboline alkaloid found the B. caapi liana, the main ingredient of ayahuasca, attracted the attention of the medical community for its possible use in Parkinson’s disease.

In the late 1950s, the Hungarian chemist and psychiatrist Dr. Stephen Szára was the first to describe the effects of dimethyltryptamine (DMT) in experimental studies in humans. DMT is found in the leaves of the bush Psychotria viridis, which is one of the main ingredients used in combination with B. caapi in the preparation of ayahuasca.

That information was discovered during the 1950s by the beatnik poet William Burroughs and attracted the attention of other poets such as Allen Ginsberg, academics such as Prof. Richard Evans Schultes (the so-called “Father of Ethnobotany”), and therapists such as the Chilean psychiatrist Claudio Naranjo.

Some decades later, the first scientific studies in humans involving ayahuasca were performed. In the early 1990s, the so-called “Hoasca Project”, involving investigators from Brazil, the United States, and Finland (including Drs. Charles Grob and Jace Callaway), reported that long-term ayahuasca users had good mental and physical health. This study was performed among members of the União do Vegetal, a Brazilian religious organization that uses ayahuasca as a sacred beverage. It was an historic study because it was the first time that scientists assessed the mental health of long-term ritual users of a psychedelic sacrament.

Then, in the early 2000s, other Brazilian researchers, such as Profs. Dartiu Xavier and Paulo Barbosa, performed pioneering work on the psychiatric and psychological health of ritual ayahuasca users. For instance, these studies were performed with adolescent (Prof. Xavier) and adult (Prof. Barbosa) ceremonial ayahuasca users. These studies were important first because they did not find any mental health problems associated with long-term use of ayahuasca by teenagers. And secondly, it was the first time that adults who were new to drinking ayahuasca were studied in this way, and the preliminary evidence demonstrated that they gained better mental health.

Also in the early 2000s, a Spanish group coordinated by Dr. Jordi Riba in the Autonomous University of Barcelona started to conduct double-blind studies with freeze-dried ayahuasca in healthy volunteers, reporting on the subjective, physiological, hormonal, and neural effects of a single or a few doses of ayahuasca. These studies are historic, because they were the first studies involving the administration of known doses of ayahuasca in an experimental setting. Moreover, these studies established that ayahuasca can be safely administered to healthy volunteers in a controlled research context. They also described in detail ayahuasca’s effects, including how it increased positive mood, activated brain areas related to emotion processing, and was associated with interesting changes to the hormone and immune systems.

I had the opportunity to perform my PhD under the supervision of Dr. Jordi Riba, from 2006 to 2012, investigating the pharmacology of two consecutive doses of ayahuasca and comparing the effects of ayahuasca with amphetamine. These were relevant research questions because in the first place we did not know if two consecutive doses would produce more intense (sensitization) or reduced (tolerance) effects, and second because no one had compared the effects of ayahuasca with a classic psychostimulant. For instance, we did not observe either a clear tolerance or sensitization for most variables but showed that two consecutive doses can be safely administered to healthy volunteers. In the second study we confirmed that ayahuasca induces subjective effects that are clearly different to those of amphetamine. But both compounds induced similar modifications in lymphocytes and cortisol levels, suggesting a shared mechanism of action.

During this period, I met Dr. José Carlos Bouso, who was also performing his PhD under the supervision of Dr. Riba. Dr. Bouso conducted a rigorous study of the mental health of more than 100 long-term ayahuasca users, including evaluations on psychiatric symptoms, cognitive function, and brain structure. Among other findings, the studies of Dr. Bouso showed that long-term ayahuasca use was not associated with psychiatric disorders or cognitive decline. This is significant because since the 1960s, the popular imagination in Western societies has often perceived psychedelic compounds like LSD, psilocybin, and DMT (one of the active ingredients in ayahuasca) as psychologically damaging drugs.

When I left Brazil in 2006, I did not know that since 2004 preclinical and human studies on ayahuasca were being performed in the Department of Neurosciences and Behavior of the Ribeirão Preto Medical School (University of São Paulo), under the supervision of Prof. Jaime Hallak.

This group, in collaboration with the group of Prof. Draulio de Araújo from the Federal University of Rio Grande do Norte in Natal, Brazil, was performing functional neuroimaging studies on the effects of ayahuasca in the visual system of healthy volunteers. They reported that ayahuasca induced a brain activation pattern during an imagery task that was similar to the pattern observed when the volunteer was looking at a real object. This was the first neuroimaging study describing the neural basis of the enhanced imagery described by ayahuasca users (the “mirações” or “visions”).

The group coordinated by Prof. Hallak was also preparing to start an open-label study with patients with treatment-resistant major depression disorder (MDD). This would be the first clinical study of ayahuasca for a specific psychiatric disorder. The open-label trial was performed at the Ribeirão Preto Medical School and involved 17 patients with treatment-resistant MDD and showed that a single dose of ayahuasca was well tolerated and induced anxiolytic and antidepressive effects that lasted for 21 days. The most relevant adverse reaction was transitory nausea and vomiting. Moreover, ayahuasca increased brain activation of areas related to emotional processing, memories, and introspection, the same areas modulated by traditional antidepressants.

I entered the group in 2013 and had the opportunity to participate in the final stages of that study. At the same period, the group was also performing animal studies on the cardiovascular effects of ayahuasca, where we observed that repeated and high doses of ayahuasca could alter the structure of the rat aorta. Although experimental studies show that a single or a few doses of ayahuasca produce only moderate increases in blood pressure and heart rate, this study in rodents suggests that more research should be performed on the long-term cardiovascular effects of ayahuasca.

Latest findings and next studies

More recently, in collaboration with the group of Prof. Araújo, our group performed a double-blind trial with 29 patients with MDD and replicated the results of the open-label trial: compared to a placebo, a single ayahuasca dose was well tolerated and induced a significant decrease in anxiety and depressive symptoms that lasted seven days after its intake.

Currently, I am the coordinator of the ayahuasca studies being performed at our department. We have three double-blind studies going on, two of them with healthy volunteers and the other with socially anxious individuals. In all three studies we are investigating the effects of a single ayahuasca dose on emotional processing and anxiety, among other biological measures, including plasma levels of endocannabinoids and neurotrophins such as brain-derived neurotrophic factor (BDNF). Each trial will include at least 20 volunteers, and the preliminary results will be presented at the World Ayahuasca Conference.

We are also planning other trials for the near future, including a study of ayahuasca and alcoholism. Our group is also in permanent collaboration with Dr. José Carlos Bouso, the Scientific Director of ICEERS. In the last years we have collaborated in several scientific articles related to the effects of ayahuasca and other serotonergic hallucinogens/psychedelics on brain function and personality and on the therapeutic potentials of these compounds from a psychiatric and public health perspective.

Furthermore, our group at the Ribeirão Preto Medical School is also one of the leading groups in the investigation of the pharmacology and therapeutic uses of the phytocannabinoid cannabidiol (CBD). We are investigating the potential beneficial uses of CBD on epilepsy, anxiety and mood disorders, psychosis, and Parkinson’s disease.

Finally, also in collaboration with Dr. Bouso and ICEERS, we will perform the first double-blind study on the effects of the plant-derived hallucinogen ibogaine for the treatment of alcoholism. In the following years, we hope to continue to perform clinical trials with ayahuasca and other plant-derived products to try to contribute in the search for better treatments for difficult-to-treat neuropsychiatric disorders. Personally, I am optimistic about the future of substances such as ayahuasca, ibogaine, and cannabinoids. Their social and scientific acceptance is increasing, in part because more people are using these compounds to enhance mental and physical health, but also because several research groups in the world are showing that these substances can be safely administered, and that they, indeed, show promising therapeutic properties.

Rafael Guimarães dos Santos, PhD
Professor Rafael Guimarães dos Santos holds a Ph.D. in Pharmacology and a Postdoctoral degree in Neuroscience. He is currently completing his postdoctoral studies in the Department of Neurosciences and Behavior at the Ribeirão Preto Medical School (University of São Paulo, Brazil), researching the potential therapeutic uses of ayahuasca, cannabidiol, and ibogaine in neuropsychiatric disorders. He is also a researcher at the Brazilian National Institute of Science and Technology – Translational Medicine, and a member of ICEERS’s Advisory Board.

Professor Rafael Guimarães dos Santos holds a Ph.D. in Pharmacology and a Postdoctoral degree in Neuroscience. He is currently completing his postdoctoral studies in the Department of Neurosciences and Behavior at the Ribeirão Preto Medical School (University of São Paulo...