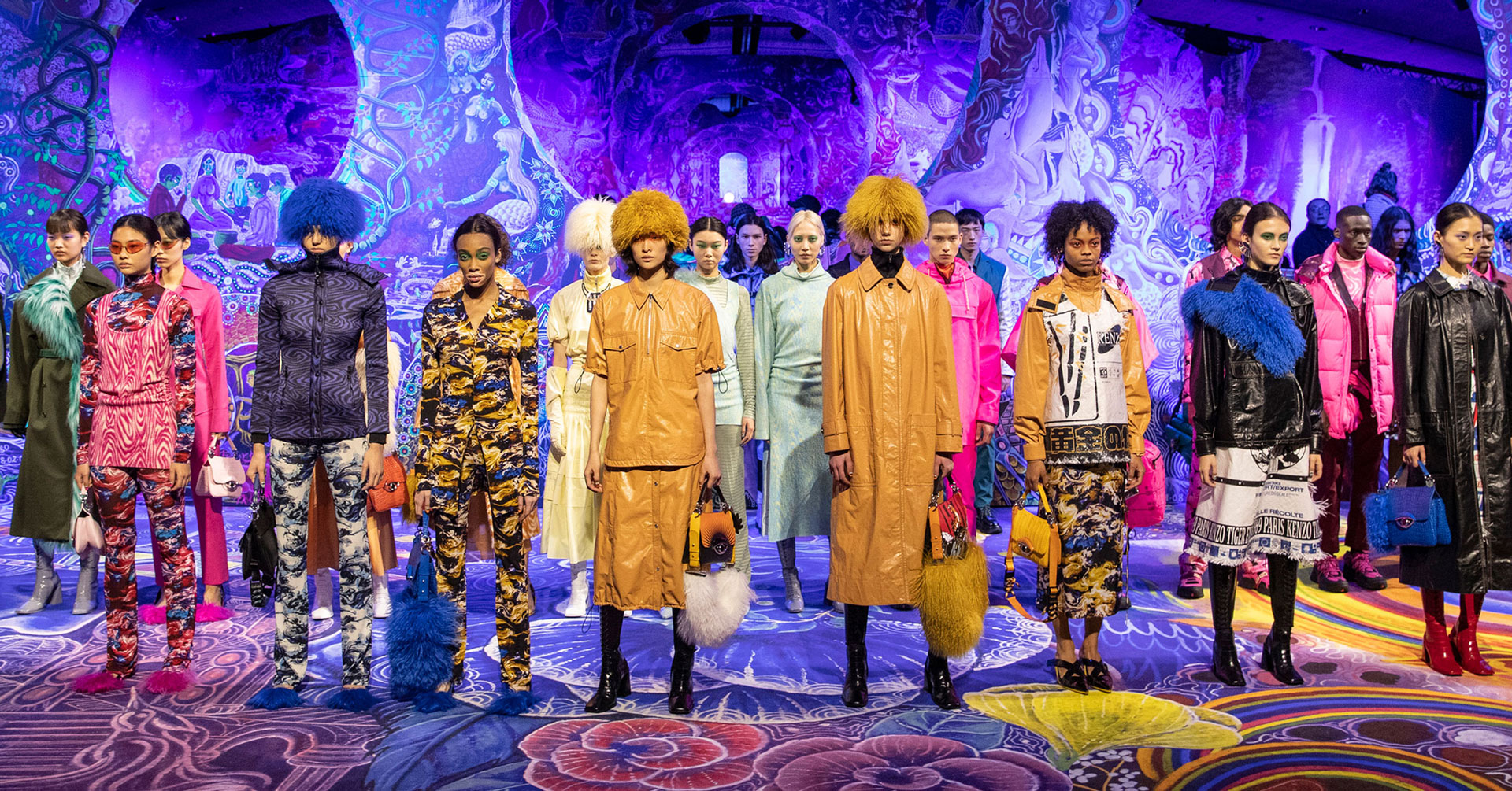 Last week, models in Paris marched a visionary runway silhouetted by a massive installation of Pablo Amaringo’s iconic indigenous art from Peru. The mythic portrayals in Amaringo’s paintings are inspired by his use of the potent shamanic brew ayahuasca, and this brought an impressive psychedelic aura to the runway. Long consumed as a sacred medicine by indigenous people of the Amazon rainforest, ayahuasca stimulates marvelous inner visions that have lent inspiration for ornamental pottery, textiles, and other types of visual art.

But the Paris show highlights a new era of ayahuasca design. It is a striking example of the brew being distilled by wealthy alchemists of fashion capitalism. As the psychedelic video below displays, models of the new Kenzo collection walked the runway each wearing around $2,500 worth of fancy shoes, designer pants, and other dazzling attire. Like the machinery of inequality itself, the indifferent and mechanical expressions on the models’ faces fade into the background while the colorful ayahuasca art and hip fashion converge to seduce and consume us.

This is not the first time ayahuasca has been domesticated by high fashion culture. The world’s largest fashion magazine, Elle, published a feature article about ayahuasca in 2014. The article describes ayahuasca as a beauty and glamor tonic that can enhance how you look. The opening paragraph reads:

My friend was glowing. Not post-sex glowing or good-makeup glowing or beach-vacation glowing. This was different… Her body language seemed remade, lighter yet more deliberate. “Oh!” she laughed. “I’m just back from Peru. It’s probably the ayahuasca.”

With a monthly audience of 69 million fashion-hungry visitors, the Elle website described ayahuasca in a language that its readers apparently want to hear. Ayahuasca is being incorporated into the fashion and lifestyle industry in the same way as other indigenous products. It enters the global marketplace under the banner of the exotic and strange.

In his book The Post-colonial Exotic: Marketing the Margins, Graham Huggan suggests exotic products are created by making strange things of other cultures more familiar but always never fully like “us”. It is the sense of an eternal otherness that gives the exotic its price. But an often-hidden price of manufacturing the exotic—whether a Native American windpipe or Aboriginal Australian boomerang—is the transformation that comes from honoring the global market’s desires, expectations, and imagination. A successful consumer product shapeshifts to the market and rarely the other way around. When washed through rounds of market testing, commercialized indigenous culture is shaped by our own desires.

At the Kenzo fashion event, a kind of essence of ayahuasca has become extracted from the wider cultural environment and history depicted in Amaringo’s paintings and reduced to an exotic backdrop. Ayahuasca art and designs have a wide history of association with indigenous spirituality and culture. The mythic creators of the world, marriage and social conventions, events for making teenagers into adults, and information about health and wellbeing, have all been expressed in ayahuasca art.

What we know today as ayahuasca art comes from diverse elements of culture that have been lost, or are being lost, under constant strain from the homogenizing beast of what can be called the global system. As a leading brand for the wealthy, Kenzo thrives at the core of this system. Its ayahuasca-inspired show was a natural progression of its recent colorful show Kenzotopia, which it described as “equal parts opulent and psychedelic… attire for new ceremonies of the future”.  It is not clear what these new ceremonies are and that is precisely the point. The diverse styles of exotic, high fashion strip indigenous culture of its histories and ceremonies and repackage it for the individual to design themselves however they see fit.

This purging of culture from itself is part of what cultural theorist Stanley Fish called boutique multiculturalism. When we celebrate cultural differences but reduce them to superficialities and cosmetics, we are guilty of proving Fish’s theory. A simple example of this would be a person looking at a Pablo Amaringo artwork and exclaiming “I love traditional ayahuasca culture!” but having virtually no knowledge of indigenous ayahuasca culture. The Kenzo show shapes and capitalizes on boutique multiculturalism.

The show will reek of cultural theft for those of us concerned about the legacies of colonization and the ongoing exploitation of indigenous people. Global inequality has been rising sharply since the global financial crisis a decade ago. Today, the richest 26 individuals own more wealth than the poorest 3.8 billion people on earth. The lavishness of the Kenzo event represents another example of the wondrous and sacred culture of the poor helping make the rich richer.

This is certainly true, but it’s not the whole story. As Gayle Highpine describes in her article on ayahuasca cultural appropriation, the sacred Amazonian brew is no stranger to the flow of the economy and has been commercialized by indigenous people for a long time. Popular ayahuasca healing services in Iquitos, Peru charge international visitors $3,000 for a 10-day retreat—roughly the same cost of a total Kenzo outfit. While two wrongs don’t make a right, the question of whether ayahuasca commercialization is actually wrong took some indigenous Amazonian shamans by surprise. “The assumptions behind the question [of commercializing ayahuasca] were completely foreign to them”, Highpine commented. The issue is clearly not if ayahuasca can be commercialized, but how and to whose benefit it is marketed and sold. A genuine respect for difference and diversity, an honest curiosity for learning about other cultures, and the steering of material gains towards community should be on the ethical radar of commercializing indigenous ayahuasca, but these are apparently missing in the Kenzo case.

Anthropologist Daniela Peluso points out that foreign investment dominates the international ayahuasca industry in Peru, or what she calls the “ayahuasca entrepreneurial ecosystem”. The result of this, she suggests, is that indigenous people are disadvantaged and the benefits of the foreigner are privileged. This can be observed by considering the poverty of the Shipibo of Pucallpa and the wider Ucayali region. They are the most internationally renowned culture to use ayahuasca but as little as a few dozen of 50,000 Shipibo earn enough to live well on the ayahuasca tourism industry, according to Bernd Brabec de Mori. Issues of water sanitization, food security, and poor health are rampant in areas of Pucallpa and Iquitos. Meanwhile, ayahuasca has become a trendy fashion accessory among some of the world’s rich and famous. This is the highly polarized global environment of ayahuasca we currently inhabit.