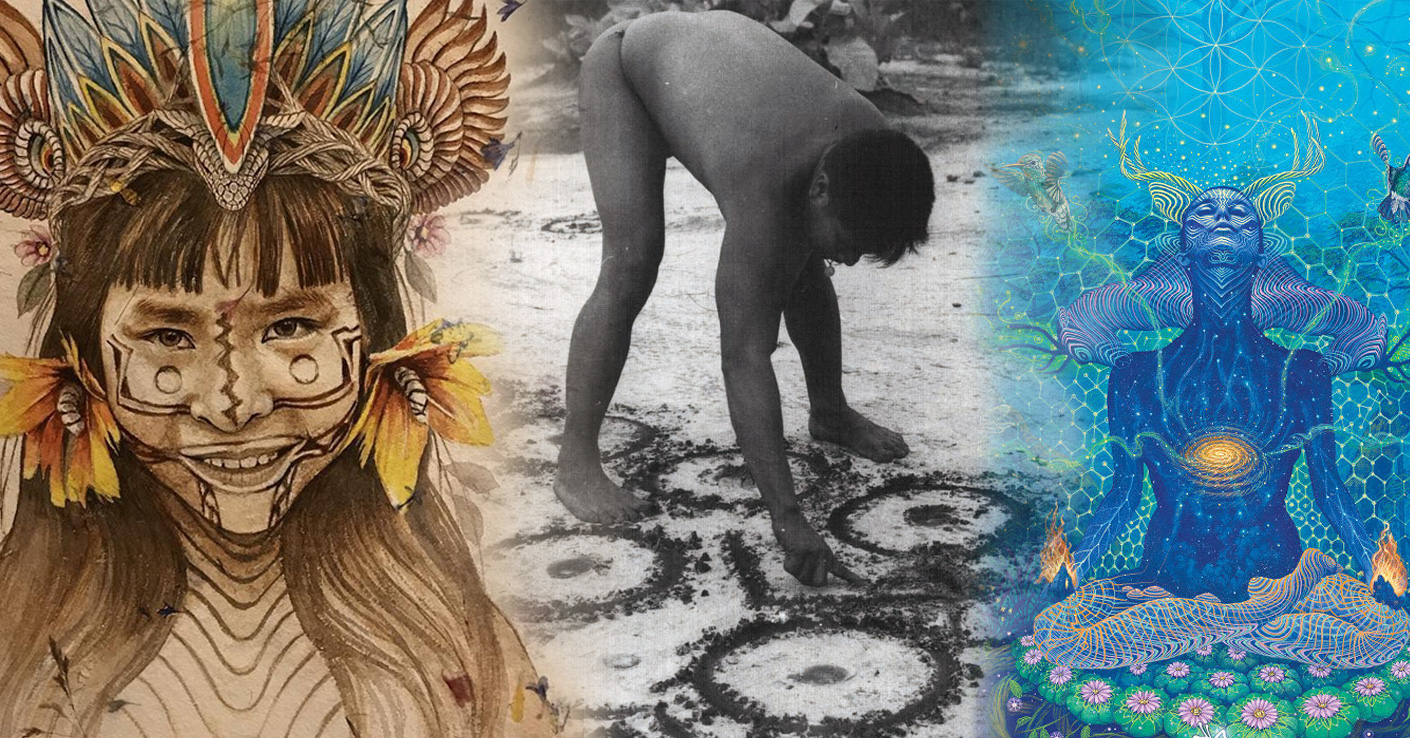 I have been told time and again by countless ayahuasca drinkers that the experience of ayahuasca is ultimately beyond words. These impenetrable descriptions are nonetheless usually followed by long narratives in which drinkers attempt to communicate the complex “inner” events of their ayahuasca experiences.

The sentences used to describe “the indescribable” of ayahuasca are often daubed with visual metaphors and visual adjectives. Ayahuasca drinkers in the West refer to each other as “vision seekers”, and the sensory architecture of ayahuasca experiences, it seems, finds itself more at home in the imaginary abodes of painters and animators than those of poets or musicians.

While the spirit of ayahuasca may speak in many linguistic modes, she (or sometimes defined as he) is uncannily fluent in visual and symbolic communication. Different indigenous cultures in various parts of the Amazon rainforest, and different subcultures in Europe, North America, Australia and elsewhere, sometimes describe radically diverse ayahuasca visions. And, to add more complexity to this already diverse palette, ayahuasca drinkers cross-culturally may associate very different meanings to the different contents of ayahuasca visions.

Ayahuasca art presents a convenient entry point for considering some of this diversity. The Tukano Indians of the Putumayo river in southern Colombia are an interesting case for considering ayahuasca and art, because, according to sonic anthropologist Bernd Brabec de Mori (2011), they are probably the first people to have ever prepared and used ayahuasca.

In the 1960s and 70s, anthropologist Gerardo Reichel-Dolmatoff illustrated how ayahuasca was a central aspect of Tukanoan culture. It underpinned Tukanoan understandings of how the world was created, how sickness is cured or manifested, how hunting and weaving can be mastered, and what is the proper conduct for living a good and happy life. In relation to this wide cultural influence, the anthropologist wrote several books and many research papers on the topic of Tukanoan ayahuasca art and shamanism.

His work shows how the paye, or ayahuasca shaman, perceived symbols in his ayahuasca visions and then drew the symbols onto the walls of long houses, or on the ground in the sand, circulating the images in the daily consciousness of social life. The most significant role of ayahuasca art, as well as the visions, in Tukano culture, he suggested, concerned inter-ethnic marriage codes and incest taboos. Reichel-Dolmatoff explains.

The sun, the Milky Way, the rainbow, etc. are all connected with native concepts of procreation and fertility, and with the details of marriage rules… The interpretation given to the motifs revolves almost entirely around the problem which is all-pervading in the native culture, and the message transmitted by the code insists on the observance of the laws of exogamy [marriage codes]. The important point, however is that the code is extended beyond the narrow confines of individual trance and is applied to the wider physical environment of everyday life. In fact, the designs and patterns perceived under the influence of Banisteriopsis are transplanted to the concrete objects of material culture where they come to constitute an art form. Practically all decorative elements that adorn the objects manufactured by the Tukano are said by them to be derived from the photonic sensations perceived under the influence of the drug… When asked about these paintings the Indians simply reply, “This is what we see when we drink Banisteriopsis.” (Reichel-dolmatoff 1987: 253)

In the early 21st century on the fringes of Western culture, ayahuasca is brewed, drunk, and penetrates the blood-brain barrier of urbanized, cosmopolitan individuals to produce visual experiences of a different type. Far from communicating incest taboos or marriage rules aimed at making political ties with outside social groups, the spirit of ayahuasca in neoshamanic circles in California, USA; Byron Bay, Australia; and Ibiza, Spain, typically communicates a general lost wisdom of nature that is feminine, nurturing, benevolent, and flexible in answering the wishes of the individuals who travel to experience her.

When traveling from Los Angeles, USA to the mountains to drink ayahuasca, or from Byron Bay, Australia to the mountains, courageous Westerners transcend environmental, cognitive, and psychic barriers. They commute to spaces beyond the edge of concrete streetscapes and billboards, beyond the light of ordinary consciousness, and beyond the experience of a bounded self that is contained in flesh and bone. This beyond is precisely within an opposite space of society—in the woods, in the forest, in nature.

Like the stories that people in the West tell about their ayahuasca visions, paintings and artworks of “mother ayahuasca” are taken from a cognitive and psychic environment beyond and circulated into the ordinary, mundane reality of internet computer screens and urban life. Ayahuasca art in the West illustrates how the sacred brew of Amazonia has become a particular symbol of life in urbanized, industrialized societies. Westerners are often seeking in ayahuasca a kind of relationship counselling to heal their divorced or complicated marriage with nature.

Artist images in the Header are by Luis Tamani, photo of Tukano shaman taken by anthropologist Reichel-Dolmatoff in the 1960s.

An earlier version of this article was published here.